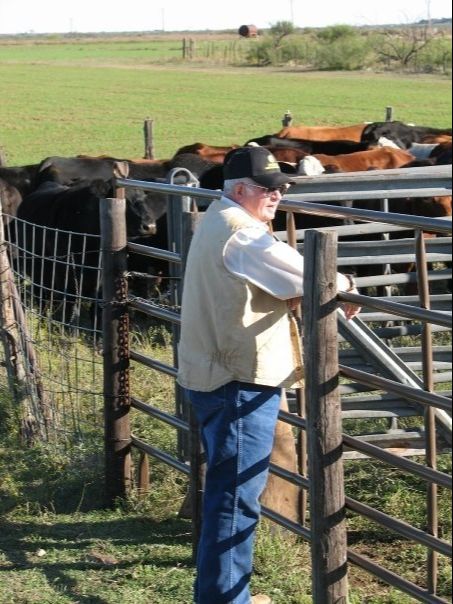 E. Eugene Johnson was born in 1940 in Quanah, Texas, to Emery and Zella Johnson and shared 55 beautiful years of marriage with his wife, Jean Krueger Johnson. He was a member of the First United Methodist Church of Quanah.

Growing up, Eugene was always a farmer at heart.  When he was younger, he would build a small farm in the yard using match sticks or small twigs.  He would stand them up vertically in areas where there was no grass in the yard to make different fields for his farm.  He would spend hours at a time using small tractors and plows to make them look as close as he could to the real thing.  So, it was no surprise later in life that he moved back home to take over the family farming operations.

As a child, Eugene attended first and second grades in Goodlett before the school consolidated with Quanah.  He would spend summers at the lake behind his grandparents’ house near Goodlett.  In particular, he enjoyed the very large hackberry trees around the lake and built a treehouse with his sister Claudia with an old set of cot springs.  Another large tree on the lake had a chain with a handle to swing out across the water.

Along with his family during his junior high years, Eugene went camping at Lake Dallas.  He chose to wear his mother’s high school ring on that camping trip.  To this day, that ring is at the bottom of the lake.

His maternal grandfather passed away during his junior year of high school, and so his grandmother would not be alone, he went to live with her for the remainder of his junior year.  While in high school, he was very involved in the FFA program and the band, and he earned his FFA Lone Star Farmer Degree.  Eugene graduated from Quanah High School in 1958.  He represented the State of Texas at the National FFA Convention in Kansas City after his senior year where he played in the National FFA Band.  He made the trip from Quanah to Kansas City aboard the Zephyr, which was a real highlight for him.

He worked for The Associates, as a heavy-duty truck representative in several cities and states, including Mc Allen, Houston, Austin, and San Antonio, Texas, as well as Memphis, Tennessee, and Silver City, New Mexico.  With all the time spent traveling and living in various places, Eugene could always seem to tell anyone who asked a great place to eat no matter the location.  During his time in Houston, he was known to stop off after work for a meal and to take in an Astros game at the Astrodome.

He did love a good meal, especially chicken fried steak, fried potatoes, red beans, and cornbread.  Though he did not spend a lot of time in the kitchen himself, he could certainly make a mean pot of seafood gumbo.  He also enjoyed playing golf and fishing and competed in many golf tournaments during his time with The Associates.  Later in life, those hobbies faded as he tended to prefer the cool air conditioning at home after long days on the farm.

He loved to travel, but he really did not enjoy stopping along the way.  Eugene was known for only wanting to stop quickly for gas, and even when forced to make a stop, he would be the first one in the car ready to get going to the destination.  His mother would always say that he would just like to drive by, point out what it was they wanted to see and say, “well, there it is.”  He loved vacationing in the mountains of New Mexico and Colorado.

After his many years away from his home, Eugene and his family returned to Quanah in 1979.  He was most recently employed as Executive Director of the Quanah Economic Development Corporation, was a farmer and rancher in Hardeman County, and had previously been employed as a Quanah municipal judge.  Those who knew him best, knew Eugene as someone who showed compassion for others, always wanted to help someone who needed it, and never knew a stranger.  He would enjoy good conversation on many topics, and he loved God, his family, and his hometown community.

It was that passion for his community and desire for helping others that led Eugene to live a life dedicated to serving others, which included active involvement with several organizations and causes. He was involved with the Hardeman County Unit of the American Cancer Society, served on the board of the Quanah Farmers Cooperative, was a board member and president of the Hardeman County Farm Bureau, established QuanahNet, was a member of the Quanah City Council, served on the Quanah Independent School District Board of Trustees, was Chair of the Hardeman County Democratic Party, and was appointed by Governor Ann Richards to serve on the Red River Boundary Commission.  The Quanah Chamber of Commerce named Eugene Citizen of the year in 2005.  Most recently, Eugene continued his life of service by chairing various committees at First United Methodist Church, serving as treasurer of the Goodlett Cemetery Association, and leading development and projects with Friends of the Park.

Although Eugene passed away in November 2019, his legacy lives on.  It is in his spirit of service, his desire to help others, and his passion for the community of Quanah and Hardeman County that this foundation derives its calling.  Eugene knew Goodlett to be the “Garden Spot of the Greenbelt.”  We share his passion for Goodlett, Quanah, and the rest of Hardeman County, and we hope we can carry on his efforts to help bring them all closer to their full potential.
​